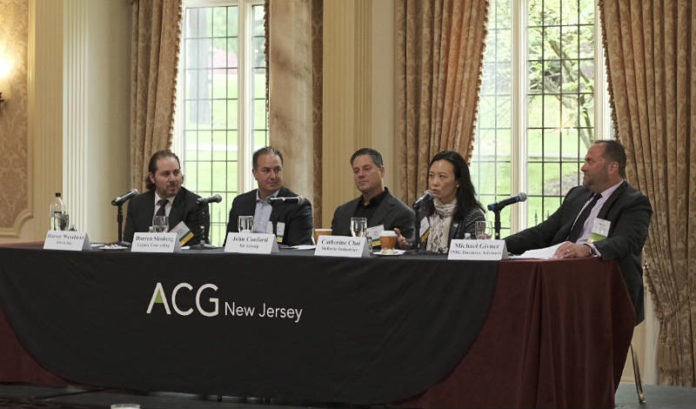 As president of IMG Business Advisors in Morristown, Michael Givner said he has seen his share of family business issues.

“Family dynamics can be a very challenging aspect of servicing the middle market,” Givner said while moderating a breakfast meeting hosted by the Association for Corporate Growth’s New Jersey chapter on Tuesday at the Pleasantdale Chateau in West Orange.

The four panelists, however, were all there to discuss how they overcame multiple challenges to take their companies to new heights as next-generation business owners.

“I took every single business and psychology course offered at Baruch College,” said Harvey Wexelman, CEO and president of Alwex Inc., a New York City-based independent insurance agency specializing in high net worth individuals and families. “And, once I could prove to (my father and his partner) that I knew more than them, I was given a nice long leash.”

Wexelman’s father and his business partner founded the company in 1991 after leaving their prior agency. Wexelman joined in 1993 — three years prior to his graduating Baruch College.

“I was 19 years old when I was told I had to take over the business because none of the other kids wanted to be involved,” he said. “So, I went to night school and worked every day for four years to learn the business from the ground up.”

Wexelman said he was at first challenged with taking charge of employees who felt as though he had simply had the business handed to him by his father.

“There’s that initial sort of change, when all the employees hate you because they don’t feel like you’ve earned it,” he said. “But I was told to eat what I killed and that the sky was the limit. I received a $16,000 salary when I took over the company and the only additional money I made was business I brought in.

“And, if I wanted to implement new technology or hire more people, that came directly out of my paycheck.”

Darren Slosberg, CEO of Legacy Converting in Cranbury, said he willingly accepted the challenge to transition his father’s company, Nosaj — a distributor of non-woven and paper disposable wiping products founded in 1971 — into a larger, more lucrative manufacturing company in 2007.

“But my brother and I at first wanted nothing to do with our father’s company,” he said.

Slosberg wanted to open a gym, he added. His brother, Jason Slosberg, wanted to become a surgeon.

However, upon learning that one of their father’s partners was stealing from him, the brothers stepped in to help.

“There was an opportunity for both of us to come into the business and help my father navigate the path in which to get rid of this guy,” Slosberg said.

“We had defined roles, but I thought I was running the company while my brother and my father were also thinking the same thing,” he said. “But we always said, look, I’ll do it the way I want, you do it the way you want and, whichever way works best, that’s what we ultimately will go with.

“My father did a very good job at giving my brother and I the autonomy to make a lot of mistakes.”

After six years working with Nosaj, the brothers transitioned into the manufacturing and private labeling of disposable wiping products when they created Legacy Converting.

“The business has grown 12-fold since,” Slosberg said. “Though my brother and I are still 50/50 partners in the company, I run the day-to-day while he takes a year and a half to live on a sailboat in Croatia, sailing the Mediterranean with his wife and kids.

“He wants to explore and do things outside of the company now, but I still love it. I don’t want to leave. But he, too, is helping me to grow, as I figure out how to incorporate such work-life balance.”

John Conforti Jr., president of Air Group in Hanover, said his family dynamics made business more complicated due to having a third sibling involved.

“When my parents would leave for Florida for a few months, we all tried to run the business without them and ultimately it always came down to pandering for the third vote,” he said.

However, in 1999 — while Conforti Jr. was working in construction as an engineer — his father merged the company with another family business.

“I called my older brother to ask him why he wasn’t putting his foot in the door and he said, ‘Where have you been?’” he said. “So, I moved back to New Jersey so that my brother, my younger sister and I could battle together with how we were going to move forward.”

The siblings would buy out the shares from the other family in 2012, only to struggle with deciding who ultimately was going to run the business.

“We get along now as well as we ever have, but there were meetings with professional psychiatrists,” Conforti Jr. said. “Aside from our own juggling act behind the scenes, though, we also had to gain the confidence of the employees who we still needed to foster a culture with, like the one that had previously been instilled.”

It was nearly four years ago that the family began to trust in each other and their clearly delineated roles, Conforti Jr. said. Even his brother-in-law has joined the business.

“In the end, the bottom line is what it is and, if the company is profitable, everyone in the family is happy,” he said.

Catherine Choi, president of Bulbrite in Moonachie, said she also quickly realized how a trio of siblings working together in a family business was not harmonious.

“For a very short period of time, my sister, my brother and I all worked in the business — and that was not good,” Choi said. “Working with my sister was great, as well as with my brother, but for whatever reason, having all three of us in the same building at the same time did not work.”

Her younger sister, Choi said, has since happily left the business to pursue other life goals, while her younger brother remains as chief strategist to the leading manufacturer and supplier of innovative light source solutions.

“My father immigrated from Korea to New York City to start this business in 1971,” Choi added. “But, because we have a rule that we must work outside of the family business before we can join, I graduated from college, got my MBA and worked out in Hollywood for eight years.

“Then, when I and the business were turning 30, my dad asked me to coffee and said, ‘No pressure, but I’m turning 60 — if you’re interested in coming into the business, now would be the time. If not, I will plan for the next phase, which may include selling.’

“Then he went on to say how he had come to this country empty-handed, without speaking English and without a dollar in his pocket. So, I joined.”

Choi said that, while she worked her way through the company for eight years before becoming president, she, too, struggled with company culture once her father handed over the baton.

“The success of a second generation and generations beyond that has a lot to do with the first generation, I think, and their willingness to be open minded,” she said. “I think a lot of business owners say they are ready to pass the baton, but they hold on to the other end of it for a really long time. Sometimes, I can tell by the look in my father’s eyes that he might want it back, but he very clearly and truly gave over the business to me when he did.”

When an employee asked her how to address a problem, however, Choi said she was taken aback by Choi’s response.

“I said: ‘I don’t know. You’ve been here longer than me. What do you think?’ And she struggled with that, because my dad had made all of the decisions for 30 years,” Choi said. “But Andrew was not the boss anymore.”

Choi said she then set out to redefine Bulbrite’s culture.

“I hired a culture consultant to help us retain the core values that my father’s business was built on, such as integrity and building relationships with partners, but I also wanted to put my own spin on it, too, to encourage our employees to take ownership, to learn and to grow — just like I had.”